Well! Despite having written an encompassing history of glam rock I somehow failed to notice that in 1975 following the disintegration of Wizzard, Roy Wood formed a jazz-rock group !

My my, that is godawful.

The lowdown via Wiki -

A lot of people had been doing jazz-rock stuff. There had been jazz musicians getting into the rock field, like Chick Corea and Stanley Clarke, but it's very rare that you find a band doing it the other way around a rock and roll band getting into jazz, and it's quite interesting. The rhythm section is very heavy, almost Zeppelinish, the horns are very jazzy and the songs are very commercial, so it makes for quite an interesting combination.- Roy Wood, Melody Maker, 3 September 1977

"They played one show, broadcast live by BBC Television and BBC Radio 1 in the Sight and Sound In Concert series, on 2 April 1977. Most of the material they played was new, though they also included The Move's "California Man", interpolating the basic riff from another Move oldie, "Brontosaurus", and Wizzard's "Are You Ready to Rock". Several of the songs appeared on their only album Super Active Wizzo, released in September 1977 on the Warner Bros. record label. They also issued two singles, "The Stroll" (1977), and "Dancin' At The Rainbow’s End" (1978). None of the recordings charted.

"A UK tour was scheduled for spring 1978, but was cancelled as they disbanded at around the same time. Wizzo Band had proved an uncommercial venture; the records received unenthusiastic reviews from critics who were baffled by the music,especially in the light of Wood's earlier track record as a creator of hit records with his previous bands, and they were ignored by radio programmers."

Around this time Roy produced an album for Annie Haslam of Renaissance, solidifying the progward tendencies. I believe they were an item as well, which is wonderfully charming and feels like one of those "showbiz" things, where entertainers breed only among each other.

Well! Despite having written an encompassing history of glam rock I somehow failed to notice that in 1975 following the disintegration of Wi... 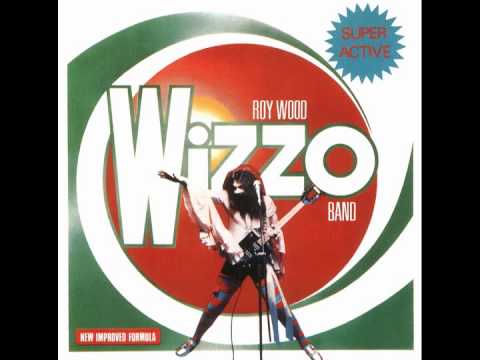