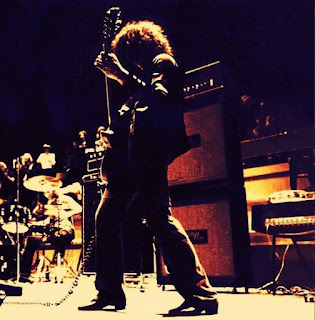 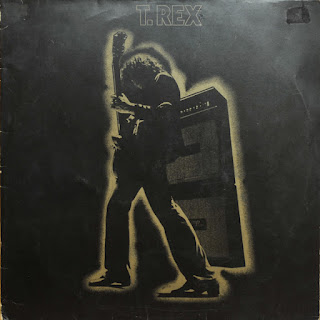 I did 3 days as a trial worker at what was then called Record and Tape Exchange (later Music and Video Exchange) before being adjudged not to have "executive potential" i.e. not hardhearted and cold-souled enough for a front counter job doing valuations on second-hand vinyl brought in for sale, often by the desperate, the pushy, the persistent - and occasionally, by a thief. You had to be deadpan in the face of wheedling and outraged, incredulous "is that all??!" responses, and stony and steadfast when threatened. I think management made the right call as regards my future with the company.
Still, I mourn all the free records I might have got. Even during the brief stint there, I observed how the staff creamed off all the really good stuff that came in- fantastic rare records, or brand-new hip releases brought in by jaded (sometimes junkie) journalists / DJs/record biz people. But being the lowliest of underlings the only booty I was allowed to take home was a  cassette of Electric Warrior.
My memories of that album are all entwined with that format, the slightly thin sound quality, the turning it over in the middle, fast-forwarding past the one shit song (the bluesy trudger on side 1). It got a lot of play in those wintry months of early '86 when I was scraping together the beginnings of a living as a music journalist.
And here's the very cassette itself - treasured still, and occasionally even dragged out to be played 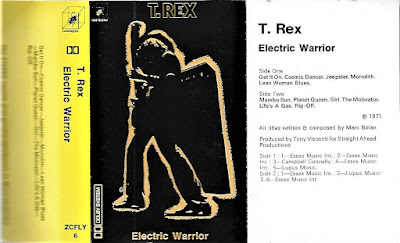 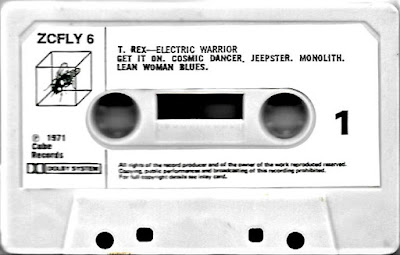 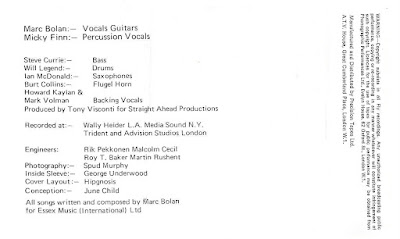 I can't tell if it's an original cassette from 1971 or a later iteration - some of the stuff on the inlay about how "this STEREO cassette gives genuine reproduction on Mono equipment" makes me thinks it's early '70s - or could it be just that they didn't bother to alter or update the artwork for the tape. And  then there's the DOLBY SYSTEM logo on the front - when did that get introduced?.
For that matter, when did prerecorded cassettes become a popular format for pop music? In the early '70s you'd have thought most kids were still listening to 7-inch singles (and the occasional album) on Dansettes or similar type record players - the kind where you could pile up a load of  singles and they'd drop down one after the other to be played (not exactly the hi-est of fi ways of extracting audio information from a vinyl platter!).
Peering at it closer, I noticed for the first time that the label is not Fly but Cube - Cube Tapes. Cube is what Fly turned into, starting May 1972. They also put out this 8-track version and an odd little EP in Mexico. 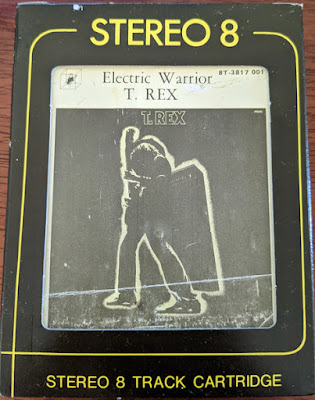 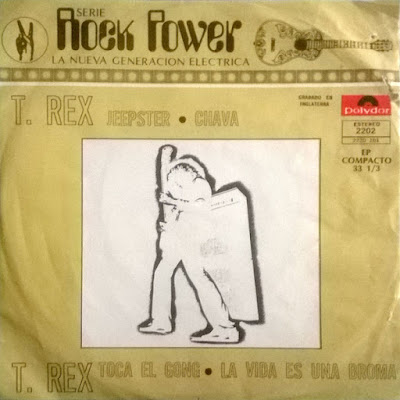 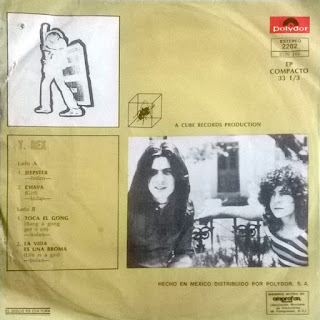 Now I think about it, I'm not sure I ever got Electric Warrior on CD - or indeed vinyl.
I have the brown  self-titled album on vinyl ("borrowed" off a friend) and The Slider gatefold (easy to find cheap in America where it was the album that got the push and the ones most Americans who love T.Rex seem to love - to me it's markedly not-as-good as Electric Warrior or even Brown).
Not having the vinyl Electric Warrior, though, I missed getting these amazing portraits of the band on the inner paper bag. 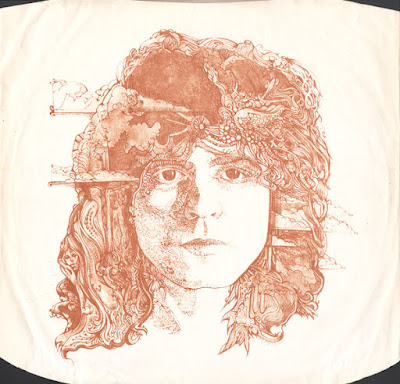 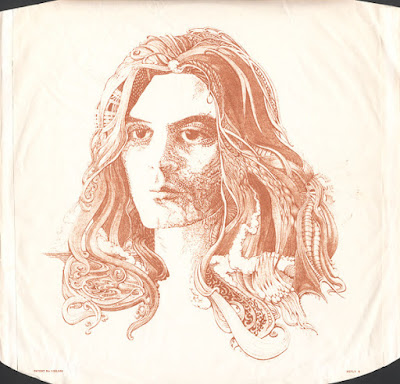 An earlier post on the mixed messages of the Electric Warrior cover and advertising: 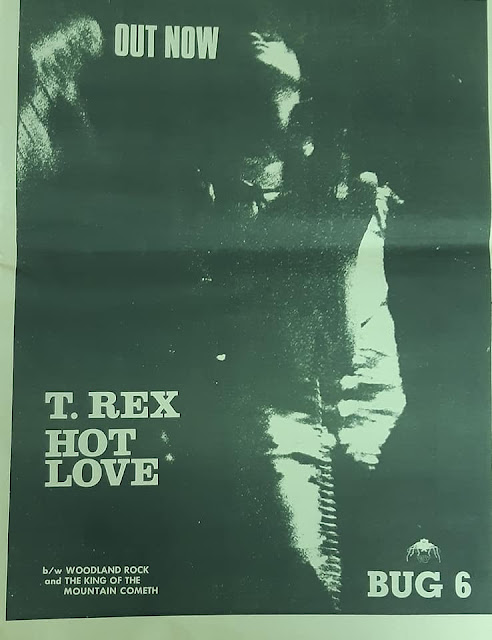 This murky -  faintly menacing -  advert seems to be still trying to sell Marc Bolan as an underground act, even on the eve of his pop superstardom. You can barely see his pretty face, let along any glitter on the cheekbones.

The musician, barely identifiable as Marc, is totally self-absorbed, wrapped up his own sound and his own cool. He's not meeting the gaze of a potential audience.

It's totally out of step with the direct appeal to tweenage girls of the song itself ("I don't mean to be bold but may I hold your hand?" - courtly love vassalage reframed in 12-bar boogie), the luscious cloying caramel-sweetness of the "la la la la-la la-la" hook / fade-refrain ...

Likewise the cover for Electric Warrior is  "heavy".  Face hidden by long frizzy hair... guitar perpendicular and phallic...  The musician is lost in the auto-erotic swirl of the awesome noise he's generating, inwardly focused on his playing, his masturbatory mastery of the instrument, barely aware of the audience... Bolan is presented as guitar-hero (a warrior armed with electricity - that massive amplifier behind him blasting out pure power). He's an active noise-maker not a passive object of desire,  a fey plaything. It could be a cover for a Paul Kossoff solo record. 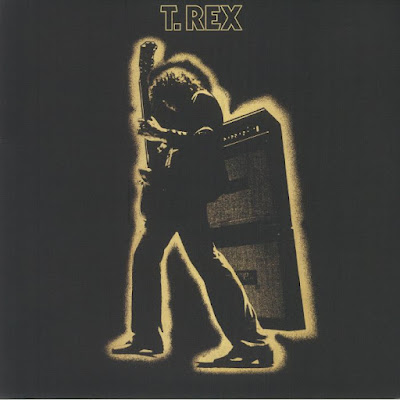 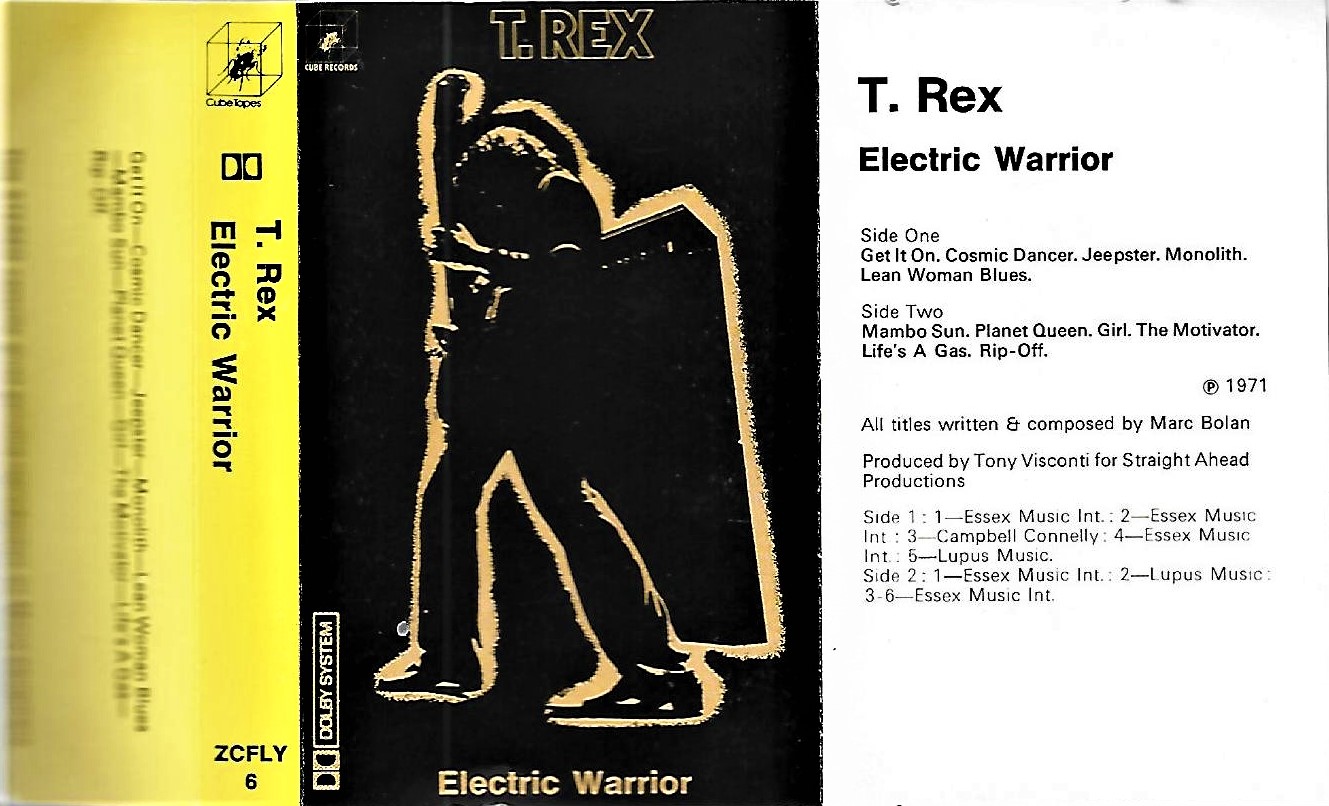 "Send in the clowns" - antitheatricality + politics - the Comeback!

A not-wholly unexpected resurgence of anti-theatrical tropesm with special emphasis on the circus, has erupted within political commentary, ...